Venture to Bear Island and reward yourself with vivid memories of one of the most unspoiled beaches on the Atlantic coast. Accessible only by passenger ferry or private boat, there's just one thing at Hammocks Beach that's crowded—the list of things to do. Stroll the beach with laughing gulls and sandpipers. Cast a baited hook into endless rows of foaming breakers. Discover tiny specimens of marine life in tidal pools and mudflats.

Use a camera or paintbrush to capture the green and gold grasses that color the salt marshes. Spend the night among the sand dunes, or simply bask in the sun and do nothing at all. Secluded and tranquil, free from intruding commercialism, Hammocks Beach may not be for everyone, but the island is a retreat for people who welcome the challenges of relentless sun, sand, sea and sky.

Bear Island has often played a role in the protection of the mainland. During the Civil War, Confederate troops on the island defended it against Union forces occupying Bogue Banks. The island again assumed military importance nearly a century later when, during World War II, the Coast Guard used it to secure the coast and monitor German U-boat activity.

Early in the 20th century, Dr. William Sharpe, a neurosurgeon of New York, came to Bear Island to hunt. His love of the island prompted him to acquire it for his retirement. Sharpe intended to will the property to John Hurst, his longtime hunting guide and friend, but Hurst persuaded him to donate it to the North Carolina Teachers Association, an organization of African
American teachers.

Camping is available on Bear Island through Hammocks Beach State Park. Primitive campsites are located near the beach and the inlet. Fourteen family campsites accommodate six people each. Three group campsites, available to affiliated groups only, accommodate up to 12 persons each. Light and simple is the way to travel as campers must carry all provisions to the campsites from the beach or ferry dock.

Water and other facilities are available on the island, except from mid-November through mid-March when the facilities are winterized. Fires are not permitted, and campers must remove all trash. Camping is permitted on numbered sites only and permits must be obtained from the park office on the mainland. Campsites are open year round. 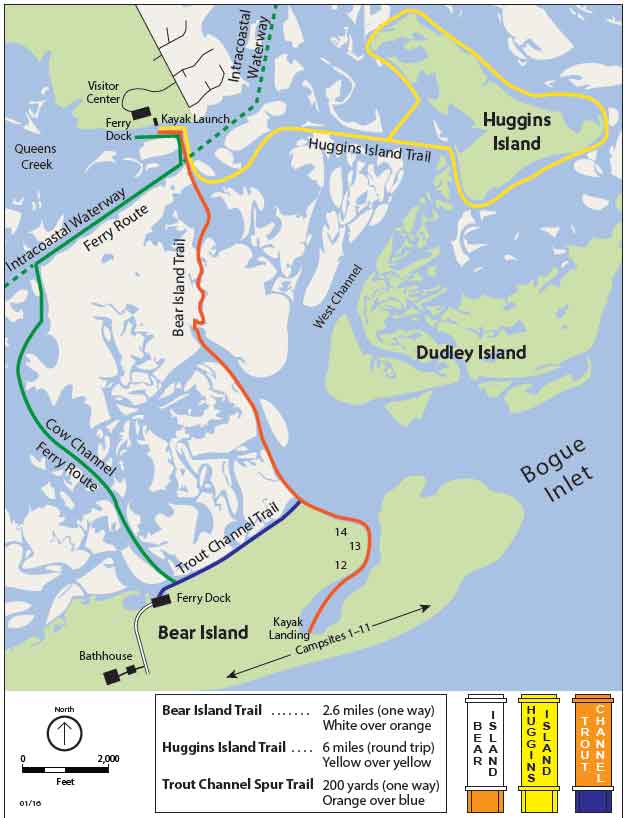 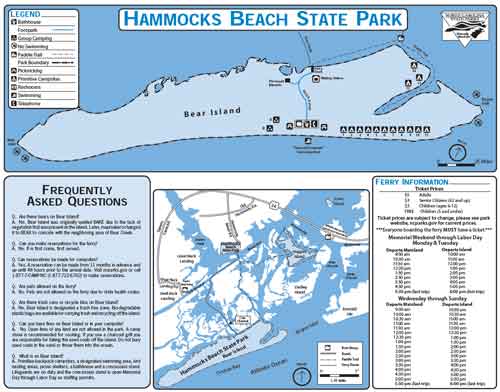